Thanks to Emma for the suggestion! Let’s learn about some animals that live on the St. Kilda islands off the coast of Scotland! 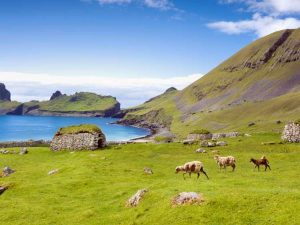 Soay rams (kept on farms, not the feral sheep): 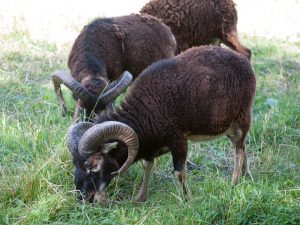 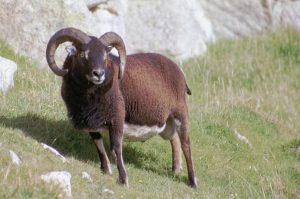 A small flock of Soay sheep (these are from a farm too): 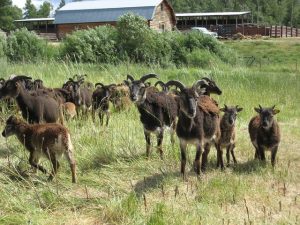 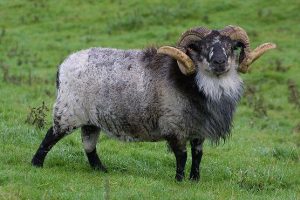 A Boreray ewe with her babies (also on a farm, or at least I think so): 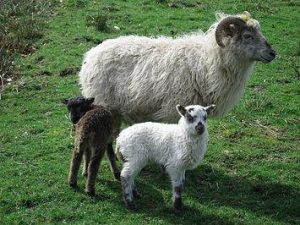 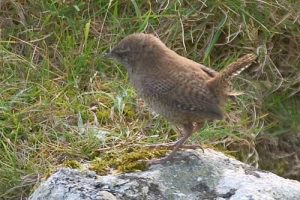 The St. Kilda field mouse (also not a sheep) is the size of a hamster: 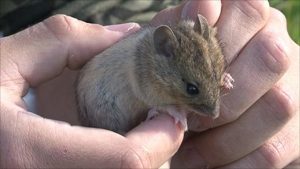 This week’s episode is a suggestion from Emma, who long ago told me about the interesting history and unique animals of the island of St. Kilda in Scotland. I’ve been meaning to cover it ever since, so finally I’m getting around to it after only two years or so.

Emma says, “It’s an amazing little island and sort of a reverse of the usual ‘humans cause extinction’ story. The humans on the island went ‘extinct’, being evacuated from the island partly because increased mainland human contact was bringing illnesses they couldn’t fight without hospitals. Two lots of rad ancient sheep and some unique wrens and mice are happily living there to this day.”

St. Kilda is not one but a group of islands off the coast of Scotland, but the largest island and the only one where people once lived is called Hirta. In 1930, everyone who still lived there moved to the mainland, but by that time hardly anyone remained on St. Kilda anyway. The island probably never had more than a few hundred people in residence at any given time. In 1957 St Kilda was designated as a nature reserve and in 1986 as a World Heritage Site.

Since then, as Emma says, the animals of the islands have mostly been left alone. This includes two breeds of sheep that were left behind on two of the smaller islands when the last residents moved away.

One of these sheep breeds is the Soay, which originally lived on a tiny island called Soay, which actually means “sheep island.” The island of Soay is only about 250 acres in size, or 100 hectares, but that’s not the only place they used to be found. The breed has lived in northern Europe for probably 4,000 years, and was a popular sheep in Britain for centuries. When all the people moved away, 107 sheep living on Soay were moved to Hirta. The sheep on Hirta are feral and receive no care from humans, but they also have basically no predators on the island. They have been studied since 1955 by a small team of scientists and conservationists.

The Soay is a primitive breed of sheep that closely resembles its wild ancestor, the Asiatic mouflon. It’s brown, usually with lighter markings on the face and rump, and the rams often grow a short mane of hair in addition to wool. Rams have dark brown horns and ewes often grow smaller horns too. It also has a short tail. In late spring, Soay sheep shed their fleece naturally instead of needing to be shorn. This is the case with many primitive sheep breeds. Its wool is considered high quality and sought after by handcrafters.

Also like many primitive breeds, the Soay doesn’t have much of a flocking instinct. Soay sheep have been exported from the islands and are kept on farms in many areas for their wool, but if a sheep dog tries to herd a flock of Soay, the poor dog is going to be so frustrated. Soay scatter instead of flocking together. It can also be an aggressive sheep, especially the rams, but it’s also a small breed, with even a big ram rarely heavier than 70 lbs, or 32 kg. And these days, the feral Soay sheep are actually getting smaller overall and have been for the last twenty years. The research team that studies the sheep thinks it’s because climate change has led to shorter, warmer winters, which allows more of the sheep to survive, including smaller sheep that would ordinarily have trouble in cold weather. The smaller sheep breed and their offspring are more likely to be small too, and after twenty years of this the breed overall is smaller than it used to be.

While the Soay used to be a popular breed throughout much of Europe, it’s an at-risk rare breed these days. There are fewer than 1500 breeding ewes registered on farms, in addition to the feral flock on Hirta.

The other breed of St. Kilda sheep is called the Boreray, and it’s also a feral sheep on one of the St. Kilda islands. In this case it lives on the island of Boreray. It’s even rarer than the Soay sheep, the rarest sheep breed in the UK. In 1999 there were only 84 individuals known, but a conservation effort by the Rare Breeds Survival Trust has increased the number to nearly 900 breeding ewes as of 2018.

The Boreray is a little smaller than the Soay and shares characteristics with that breed, including a short tail and its fleece shedding naturally in late spring. It’s usually gray or white, although sometimes brown, often with a speckled black face. Its wool is much coarser than the Soay’s and was traditionally used to make tweed fabric or carpets.

But sheep are domesticated animals, feral or not. What about some of the other animals of St. Kilda?

The St. Kilda wren is a subspecies of Eurasian wren that’s found nowhere else in the world. Like other wrens it’s a tiny songbird, brown and gray with a short tail. It was only recognized as a separate subspecies in 1884, and as happened a lot in those days, museum collectors killed so many of them to stuff and mount that the bird nearly went extinct. Fortunately, early conservationists realized the danger in time, and a special Act of Parliament in 1904 protected the bird. After all the people were evacuated from Hirta, a small team of scientists studied the wren. In 1931 68 nesting pairs were counted, and in 2002 230 breeding pairs were counted. That’s still a low population, but since the wren has almost no predators on St. Kilda, that’s a decent number for such a small habitat.

The St. Kilda wren eats insects, spiders, and other small invertebrates. The male builds the nest out of dead grass and other plants, moss, and seabird feathers.

This is what the St. Kilda wren sounds like:

But the field mouse was fine, and is common throughout the island of Hirta and at least one other island. It actually moved into the abandoned buildings after the house mice went extinct, since houses are full of little nooks and crannies that mice can use as homes. Researchers think the mouse may have been on the islands for something like a thousand years, arriving with Viking settlers.

The St. Kilda field mouse is twice as large and heavy as mainland mice, probably because it basically has no predators. It’s an omnivore like most other mice, and eats seeds, moss, insects and other small animals, and even scavenges meat from dead sheep and birds.

Many sea birds nest on St. Kilda, including Atlantic puffins and northern gannets. The grey seal started breeding on Hirta after everyone left. But except for the sheep, the mice, and the gray seals coming ashore during breeding season, there are no other mammals living on St. Kilda. There are also no trees, no bees, and a limited number of plants and animals, all due to how remote the islands are. They’re 41 miles, or 66 km, away from the Outer Hebrides, a series of much larger islands off the Scottish coast.

Humans have probably lived on Hirta for two thousand years, maybe longer, and have visited the St. Kilda islands as long as 5,000 years ago. But now that the people are gone, the mice and sheep and birds are free to live their quiet lives. As long as they don’t mind a few curious scientists keeping an eye on them.