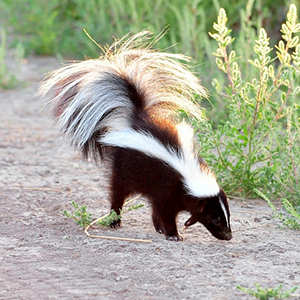 The stink badger looks like a shaved skunk with a bobbed tail: 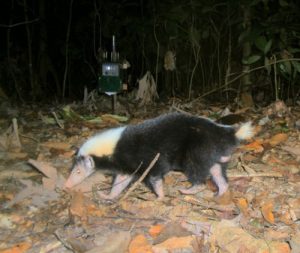 The zorilla wants to be your stinky friend: 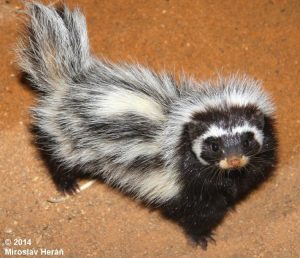 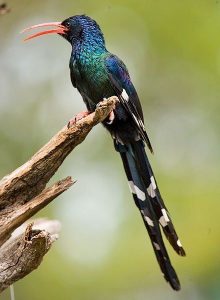 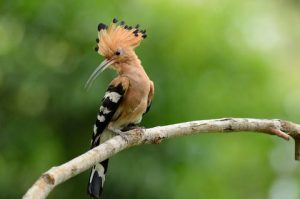 This week we’re going to learn about some animals that are infamous for their stinkiness. This wasn’t the topic I had planned on for this week, but last week my house got skunked. That is, a skunk sprayed an animal very close to my house, which means I woke up at 4:45am gagging from the smell of point-blank skunk odor. And this was with the windows closed and the air conditioning going. It was so bad I thought I would throw up, so I yanked on my clothes, grabbed my purse, and fled the house at 5:30am. I went to work early—don’t worry, I got coffee on the way—and spent the whole day smelling skunk faintly where the smell clung to my hair and, oddly, my phone case. Also I spent the whole day complaining to my coworkers.

Fortunately, when I got home the smell had dissipated somewhat, so I opened all the windows and doors and by the next morning it was mostly gone. But it got me wondering why skunk spray smells so, so bad and how many other stinky animals are out there.

The skunk is native to North and South America, although there are two species of related animals that live in some of the islands of the Malay Archipelago, called stink badgers. No seriously, that’s really what they’re called. Skunks and stink badgers are related to actual badgers and to weasels, but not closely.

The stink badger is black or dark brown with a white stripe that runs from its head down the back of its neck and along its spine, and finishes at its little short tuft of a tail. The skunk is black or dark brown with one or two white stripes or white spots, depending on the species, which continues down its long fluffy tail. In all cases, though, these stinky animals are vividly patterned with dark fur and bright white markings as a warning to other animals. Do not get too close or there’s a world of stink coming your way. Also, I can verify from my own experience that the white markings of a skunk make it much easier to see in the darkness and therefore avoid. Since the skunk is crepuscular, meaning it’s most active around dusk and dawn, that’s important. The stink badger is more nocturnal than the skunk.

Both the skunk and the stink badger have relatively short legs with sharp claws. Both are relatively small, about the size of a cat. Both are also good diggers and spend the daytime asleep in their burrows. In winter the skunk doesn’t hibernate but it does stay in its burrow more, spending most of its time asleep. This is the best way to deal with winter cold, if you ask me.

Female skunks share a den in the winter but males are usually solitary. This means the females retain a higher amount of body fat when the weather warms up, since they didn’t need to burn that fat to keep themselves warm. Researchers think this helps the females stay in better condition for a spring pregnancy. Meanwhile, males are skinnier at the beginning of the winter but by staying alone they’re less likely to contract disease or parasites.

Mating season for skunks is in spring and babies are born in early summer. They mostly stay in the burrow for about two months, then start accompanying their mother when she goes out foraging. The mother is really protective of her babies and will spray any animal that approaches.

Although the skunk can hear and smell well, it has poor vision. That’s why so many are killed by cars. The skunk’s biggest predator is the great horned owl, because owls don’t have much of a sense of smell and don’t care about being sprayed.

The skunk and the stink badger are both omnivorous and will dig up grubs and earthworms, will sometimes eat carrion, and also eat frogs, crustaceans, and other small animals, leaves and other plant parts, especially berries and nuts, and insects. The skunk especially likes bees. It has thick fur that helps protect it from stings, and will eat all the bees it can catch.

The skunk also eats other stinging insects, including the dreaded yellow jacket. That’s a type of wasp that’s common where I live, with incredibly painful stings. A few years ago I noticed a yellow jacket nest in the ground behind my garage, and that night when the yellow jackets were asleep I carefully trimmed the long grass around the nest opening to see how extensive it was. Then I made a mental note to get some yellow jacket poison the following day. When I went back out to deal with the nest the next night, it was gone. A skunk had discovered it, probably because I’d exposed it by trimming back the grass, and had dug the whole nest up to eat the yellow jackets. There wasn’t a single one left. Ever since I have been lowkey fond of skunks, although I do wish they wouldn’t spray so close to my house.

If you’ve only ever smelled skunk spray in the distance, you may not think it’s so bad. But the smell is horrific up close, strong enough to induce vomiting, and it can cause irritation to the skin or even temporary blindness if it gets in the eyes. And the skunk is really accurate when spraying, aiming at the face. Not only that, because it’s an oil, the spray clings to skin, hair, or fur, and it won’t just wash off. It can literally take weeks to wear off normally. If your clothes get sprayed, or your dog’s collar, the smell will never come out and you will have to throw the clothes away.

Domestic dogs get sprayed by skunks a lot. Some dogs just never learn. I once had a cat who was sprayed by a skunk too. You may have heard that you can remove the smell by washing your pet in tomato juice, but this actually doesn’t work. I asked a veterinarian how to clean up my cat, and this is what she told me. This worked great, by the way.

Mix hydrogen peroxide about half and half with warm water and add about a spoonful of dishwashing liquid. Rub the mixture into the fur thoroughly, making sure to work it in well right down to the skin. If you can tell where the spray is, concentrate on that part. Do your best not to get the mixture into your pet’s eyes, and make sure to use good warm water. Part of the reason animals hate getting bathed is because they get cold really easily once their fur is wet, so using really warm water helps. Then rinse your pet thoroughly, making sure to get all the soap out so they won’t get itchy. You may need to mix up another batch of the hydrogen peroxide, water, and soap and give the stinkiest areas another wash. After you’ve rinsed your pet thoroughly, wrap them up in a towel and gently squeeze as much of the water out of the fur as you can. Then make sure you have a dry towel to put in your pet’s bed or basket or wherever it wants to hide after its horrible bath.

In July of 2019 a research team published a report about a type of fungus that makes a chemical called pericosine A that neutralizes noxious chemicals. The researchers tested pericosine on skunk spray and discovered that it neutralized the smell harmlessly. So it’s probably just a matter of time before pericosine is marketed to veterinarians to help pet owners. Let’s hope so.

Even skunks don’t like to be sprayed, incidentally. Males fight each other during mating season and will sometimes spray each other. A skunk reacts like any other animal when it gets sprayed.

The zorilla is another stinky animal related to the skunk, although it lives in parts of Africa. It’s brown with white markings and is sometimes called the striped polecat or African skunk. It’s about the same size as a skunk or stink badger and looks and acts very similar, although it’s a carnivore and much more social than the skunk. It’s also related to the honey badger, which we talked about in episode 62. If you remember, the honey badger is also black with a broad white or silvery stripe down its back, and it can invert its anal sacs and discharge a stinky oil, although it doesn’t spray like a skunk.

But there’s another animal that actually sprays a smelly substance for defense, and it’s not one you’d expect. It’s a bird called the hoopoe, along with its relative the woodhoopoe.

The woodhoopoe lives in woods, savannah, and rainforests of Africa. It looks something like a cuckoo, with a very long tail marked with white spots. It’s mostly a metallic black in color, although some species have markings in other colors. Males have longer, more curved bills than females because they eat larger insects that live in bark and rotten wood while females eat smaller insects that live mostly on leaves. In this way, mated pairs don’t compete with each other for food.

The hoopoe lives across Eurasia and parts of Africa, and while it’s related to the woodhoopoe, it looks very different. It has a long crest that it can raise and lower like a crown, and it’s a pretty tan or brown color with black and white markings. Both males and females have long, slightly curved bills that they use to catch insects and other small animals.

Female hoopoes and woodhoopoes are picky about nesting spots. The female likes to nest in dead trees in rotting wood, or sometimes in a gap in a rock wall. The female incubates her eggs alone. But animals find dead trees and crumbling walls easy to climb, so to protect her nest the female can spray a foul-smelling liquid from the gland that most birds just use to secrete preening oil. This is the case for the female hoopoe and woodhoopoe too most of the time, but after she lays her eggs the gland becomes weaponized. Not only that, when the babies hatch, they develop the same gland. The female rubs the stinky oil on her babies and on the nest to deter predators, and researchers think it may also deter parasites. If an animal approaches the nest anyway, the female can spray the oil at it. And if the female is off catching food for her babies, the babies will hiss, peck, and squirt liquid poop at the predator. At that point, most predators probably just decide to go hunt something else. After they clean up.