As we get closer and closer to Halloween, the monsters get weirder and weirder! This week let’s look at two mystery animals from Scotland, one of which is supposed to break into coffins and eat the bodies! That’s disgusting!

A stoat in its winter ermine coat: 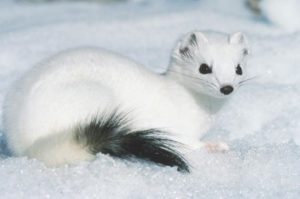 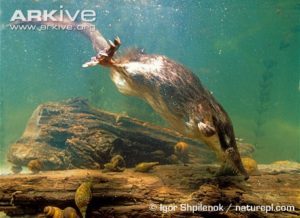 We’re one week closer to Halloween and things are getting spookier and spookier. This week, we’ll learn about two mystery animals from Scotland. One of them poisons the water it lives in, and the other breaks into coffins to eat dead bodies. oh my gosh that’s horrible

The lavellan was supposed to be a rat-like rodent but bigger than a rat with an oversized head, and with a venomous bite. It lived in marshes and in deep pools along rivers, and its presence was enough to poison the water it lived in. If cattle drank the water, they would die.

It’s possible that the lavellan was just a story to keep children away from marshy areas and deep water. But it’s also possible that it might be based on a real animal.

The name lavellan is the same name used in Scottish Gaelic for the water shrew and water vole. The water shrew is big for a shrew, but small in comparison to a rat, only 4” long, or 10 cm, not counting its long tail. The water shrew does have a venomous bite, but it’s not powerful enough to kill a cow. It eats small fish, snails and small crustaceans, insects, amphibians, and small rodents. The water vole is about twice the length of the water shrew, but with a relatively short tail. It mostly eats plants, although it sometimes also eats frogs and tadpoles. It’s also not venomous.

But before we talk any more about the lavellan, we need to learn about the earth hound.

The earth hound, or yard pig, is supposed to be a rat-like animal that lives in burrows and is occasionally unearthed when plowing. It’s the one that is supposed to dig into graveyards, break into coffins, and eat the dead bodies.

We know more about the earth hound than the lavellan, largely due to a letter in the archives of the Natural Museums of Scotland.

The letter was written by a man named Smith of Wartle, who in 1917 wrote to James Ritchie in Edinburgh. Smith’s letter said that the father of a local gardener had dug up an earth hound while plowing in 1867 or thereabouts. The animal bit his boot when he kicked at it, biting so hard that it cut through the leather. The man beat it to death with the plow’s singletree.

Smith reported that the animal was dark brown, the size of a ferret but shaped roughly like a rat with a more doglike head, and a bushy tail that was about half the length of a rat’s tail. The head was long and the nostrils piglike, and it had white tusks—probably incisors. And it had feet like a mole’s, which makes sense if it is a burrowing animal.

Stories of the earth hound are still around in parts of rural northern Scotland. The animal is said to be seldom seen, often lives in churchyards, and likes areas around rivers. But is this a real animal, maybe one that’s either rare or now extinct? Or is it just an interesting bit of folklore?

Earth hound and earth pig are local names for the badger, but it’s clear this animal isn’t a badger. In Smith’s letter, he mentions that “At a casual glance it would be mistaken for a rat, but was quite unlike on close examination.”

The first thing I did was make a drawing, going by the description given of the 1867 animal. It turned out to look like a small, skinny-tailed otter with rat teeth—but while otters do dig burrows, do live near water, and are carnivorous and might occasionally snack on carrion if they happened upon a fresh body, they’re also much larger than the earth hound. Plus, everyone knows what an otter looks like. Plus, no one could look at an otter and mistake it for a rat.

The lavellan is a folktale reported from Caithness and Sutherland in the highlands of Scotland, while the earth hound is reported from Banffshire in the lowlands. The two areas aren’t all that far apart these days, with a rough driving distance of around 150 miles along the coast, or 270 km. But in the days before internet, TV, telephones, and quick and easy travel, local legends and stories could develop very differently in different areas although they stemmed from the same source. In other words, is it possible that the lavellan and the earth hound are based on the same animal?

Both the lavellan and the earth hound are described as about the size of a rat, which they somewhat resemble. We have a better description of the earth hound, but we do know that both animals are supposed to live in and around water. The lavellan has an oversized head, the earth hound has pronounced piglike nostrils.

So is there a real animal that fits this description? Let’s take a look at a few possibilities.

Voles have pronounced nostrils but are small, and are very common. Moles are likewise quite small, well-known, and have stubby little tails.

Stoats live throughout Scotland and much of northern Europe and the northern parts of North America. Its winter coat is white and the fur is known as ermine. It’s bigger than the weasel, which it resembles, with males being around a foot long, or 30 cm. It eats small rodents and rabbits, pursuing its prey down their burrows, and will also climb trees to eat eggs from bird nests.

But while the stoat fits the physical description of both animals pretty well, it’s not a water animal by any means. And it’s also common and therefore well known to locals. Its snout is also relatively short.

So what about a ground squirrel of some kind? There are lots of ground squirrels around the world, from chipmunks and gophers to marmots and prairie dogs, all the way up to groundhogs. Ground squirrels usually have relatively short tails that are usually somewhat bushy. They dig burrows and many are omnivorous, although I don’t know whether they’d eat carrion. But there are no known ground squirrels in Scotland, and ground squirrels do tend to be plump, short-snouted, and don’t resemble rats very closely.

It’s looking more and more like the lavellan and the earth hound have to be animals from folklore only. But there is one other possibility, a little-known animal called a desman. And this is where it gets interesting.

There are two known species of desman, the Russian and the Pyrenean. The desman is related to moles and eats insects, amphibians, and small crustaceans. It likes ponds and streams, and it lives in burrows connecting to the water. Its paws are webbed and it swims well, although it’s not as good at digging as moles are. Its nose is long and pointed, and it has a long tail that is slightly flattened to help it swim. Its eyes are tiny and it doesn’t see well, instead relying on the touch-sensitive Eimer’s organs at the end of its snout. It doesn’t have a nose star like its distant cousin the star-nosed mole, but its nostrils are almost as sensitive. Its ears aren’t visible under its fur and it’s nocturnal.

And, most importantly, the desman is not found in Scotland. The Russian desman lives in one small part of Russia, while the Pyrenean desman lives in mountainous areas of Spain, Portugal, and a few other spots. Both are endangered.

Is it possible, though, that there was once a species of desman that lived in northern Scotland? We know from the fossil record that the Russian desman used to be much more widespread than it is now, and it did live in parts of the British Isles during the Pleistocene, or ice age, although not as far north as Scotland.

Moles and shrews are related, so while the desman species alive today aren’t venomous, as far as we know, perhaps the Scottish desman might have been. It also might have been larger than the living species. If it was already rare in the 19th century and before, it might have taken on mythical characteristics that persist today even though the animal must have gone extinct by now.

This is just speculation, of course. But it would be pretty awesome if evidence of a species of large desman was found in Scotland one day, and it might very well have given rise to both the earth pig and the lavellan stories. Let’s hope it didn’t actually break into coffins, though. Ick.