You may know what fossils are (I hope), but have you heard of trace fossils? You have now!

A giant ground sloth footprint with a human footprint inside it, made some 11,000 years ago: 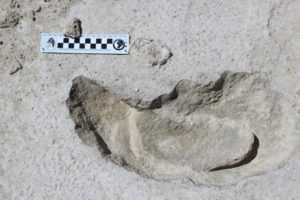 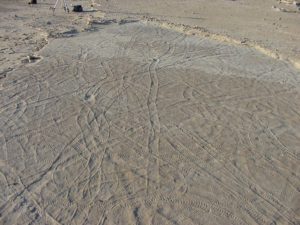 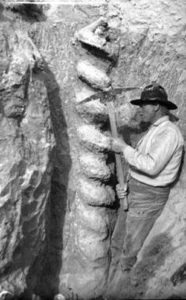 A Paleocastor fossil found at the bottom of its fossilized burrow: 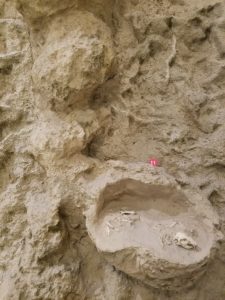 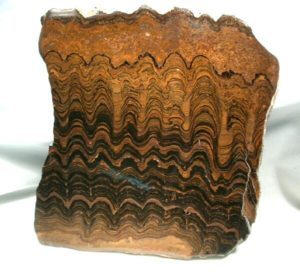 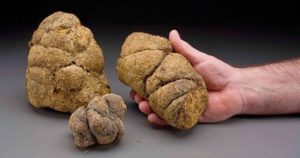 Gastroliths found with a Psittacosaurus:

This week we’re going back in time to look at fossils, but these aren’t regular fossils. They’re called trace fossils, or ichnofossils. Instead of fossilized bones and other body parts, trace fossils are records of where organisms were and what they were doing.

Fossil footprints are one of the most common trace fossils. We have lots of dinosaur footprints, and from them we know that dinosaurs held their tails off the ground, that some dinosaurs traveled in herds with the young in the middle, and things like that. A fossil footprint is formed when an animal steps in soft mud or sand, usually near water, and the resulting footprints were covered with sediment which then dried, protecting the footprints. If the footprints continued to be protected from water and other processes that might wipe them out, over the years more and more sediment was deposited on top, eventually compacting it so that pressure and chemical reactions within the sediment turned it to stone. This is why we sometimes have two impressions of the same footprints: the actual footprints and a cast of the footprints made by the sediment that filled them initially.

The White Sands National Monument in New Mexico has so many footprints of so many animals around what was once a lake that it’s referred to as a megatrack. Seriously, we’re talking hundreds of thousands of footprints. In 2014 a team studying the tracks found a set of ancient human footprints, the first ones found in the park. But while the tracks were well preserved, the team couldn’t pinpoint how old they were. They invited other researchers to come examine the prints to help date them.

But that’s not all. Bennett and the other scientists at the site followed the tracks of both sloth and human and found marks where the sloth turned around and reared on its hind legs to face the approaching human. And there are more human prints that approach at a different angle—not just human prints, but prints that suggest the human was actually tip-toeing.

The most likely explanation is that the humans were hunting the sloth, with one human getting its attention while a second crept up behind it. But we don’t know for sure. One odd thing is that the human trailing the sloth actually had to stretch to step inside each sloth print. Even small giant ground sloths were enormous, nine or ten feet long, or about three meters, with long curved claws. Ground sloths were plant-eaters that used their claws to strip leaves from branches and dig giant burrows, but the claws made formidable weapons too. It’s possible that the ancient human was just amusing himself by stepping exactly in the sloth’s prints.

Since this initial finding, researchers have found more sites where sloths appear to have turned to face an aggressor, possibly humans. The age determined for the prints, around 11,000 years old, corresponds with the time that giant ground sloths went extinct in North America. Researchers have long suspected that humans hunted them to extinction, and now we may have some direct evidence that this happened.

But fossil footprints aren’t just of big animals. Small squidgy ones leave footprints too, or trails that show where an animal traveled even if it didn’t actually have feet. For instance, 510 million years ago, during the Cambrian period, a creature lived along the shores of a shallow sea and left tracks that have been found in North America. The fossil tracks are called Climactichnites and while we don’t know what animal actually left them, paleontologists have determined that there were two species and that they were probably slug-like in appearance, possibly an early mollusk, since modern slugs and their relatives sometimes leave similar tracks. We even have some body prints of the stationary animal, and some of them were 27 inches long, or 69 cm.

Similarly, fossilized burrows are considered trace fossils. But often fossilized burrows don’t actually look like holes in the ground. Instead, the burrow has filled up with soil that then fossilizes, leaving the shape of the burrow behind in a rock that looks different from the surrounding rock. And these can be remarkably difficult to identify in some cases.

Back in 1891, a rancher in Nebraska showed a visiting geologist some weird formations he’d found. The geologist, Erwin Barbour, didn’t know what they were. He and the rancher dubbed the formations “devil’s corkscrews,” and probably had a laugh. But the formations did look like corkscrews—but they were enormous, taller than a full-grown man and always situated straight up and down. Some were as long as ten feet, or three meters.

Those people were right, of course, but at the time, no one knew for sure. And if the corkscrews were burrows, what made them?

The mystery was solved when fossils of a beaver relative called Paleocastor was found at the bottom of one of the corkscrews. Unlike modern beavers, it wasn’t an aquatic rodent but a burrowing one, and it lived around 25 million years ago. Once the Paleocastor fossil was discovered, it was clear that the marks noted on some of the corkscrews, which had been interpreted as scratch marks from claws, were actually tooth marks. They perfectly matched Paleocastor’s teeth, which meant the beaver excavated its corkscrew-shaped burrow by chewing through the dirt instead of digging through it.

So why did Paleocastor dig burrows with such an odd shape? The answer may lie in another fossil found not in the bottom of the burrow but stuck in the corkscrews. Zodiolestes was an extinct weasel relative. Possibly it had gone down the burrow while hunting beavers, become stuck in the tight corkscrew turns in the tunnels, and died.

More recent research shows that Paleocastor burrows were frequently connected to one another with side passages, sometimes hundreds of burrows joined together like the burrows and tunnels of modern prairie dogs. This suggests that Paleocastor was a sociable animal that lived in colonies.

As it happened, Dr. Barbour had been right about one thing. The area where the devil’s corkscrews were initially found had once been a lake. His mistake was not realizing that the structures had been dug into the ground where the lake had once been.

Some of the oldest fossils known are trace fossils called stromatolites. These are stones that were formed by microbes. Early life consisted of microbial mats, colonies of microorganisms like bacteria that grow on surfaces that are either submerged or just tend to stay damp. Microbial mats are still around today, often growing in extreme environments like hot springs and hypersaline lakes. When microbial mats grow on a sea or lake floor, they tend to build upwards, forming columns or even reefs that rise out of the mud and toward the light. But while stromatolites are formed by bacteria, they’re not formed of bacteria. Instead, the stones are formed from grains of sand and other sediments that were trapped and cemented together within the mats, which forms a thin layer of limestone. The layers grow over time, giving stromatolites a banded or striped pattern. But it can be really hard to tell them apart from regular old non-stromatolite rocks that also happen to have a banded pattern. Geologists spend a lot of time studying stromatolites and suspected stromatolites to find out more about them. Microbial mats evolved almost 3.5 billion years ago and it’s possible they were around as much as 4 billion years ago. The earth is about 4.5 billion years old, if you were wondering.

But let’s return to more modern times, with animals and fish and things. Another trace fossil is one I’ve mentioned here a few times, the coprolite. A coprolite is a fossilized poop. Most of the original organic material has been mineralized, preserving it. Coprolites are valuable since paleontologists can cut them open to find out what the animal was eating, if it had intestinal parasites, and lots of other information. Coprolites are also frankly hilarious. Did you know that if you become a scientist whose area of study is coprolites, you’re called a paleoscatologist?

We’ve also talked about gastroliths before. Gastroliths are small stones swallowed by an animal to help digest its food. The stones especially help grind up plant material, which eventually causes the stones to become smooth. Lots of animals use gastroliths for digestion, including birds that eat plants, crocodiles and alligators, seals and sea lions, although they may swallow them by accident, and many dinosaurs, especially sauropods. We know sauropods swallowed stones to help in digestion, because we’ve found gastroliths associated with sauropod fossils.

Other trace fossils include marks an animal may have made during its life, like those tooth marks preserved in the devil’s corkscrews. Skin imprints, or fur or feather imprints, are also trace fossils but are incredibly rare. Sometimes a skin imprint remains in place around an animal’s fossilized body parts, which gives paleontologists incredible insight into what an animal looked like while it was alive. That’s how we know a lot of dinosaurs had feathers. Root cavities are trace fossils too, caused not by animals but by plant roots that burrow into the soil but rot away, leaving a hole that fills with dirt and later fossilizes in the shape of the original roots. There’s even a type of trace fossil called a urolite, which was caused when an animal urinated and the urine stream left marks on soft ground.

Trace fossils are remains of biological activity. But animals and plants aren’t the only things that can move soft soil. Cracks in dried-out mud are sometimes fossilized, as are ripple marks from water and little dimples made by raindrops or bubbles. Geologists use these fossilized moments in time to help determine how the rock strata have been shifted by geologic forces. They know that a rock that shows ripple marks was once flat, so if it’s been tipped up sideways or deformed into a curve, they can determine what forces were at work on the rocks over the centuries.

It’s not all that uncommon to find these non-biological traces alongside trace fossils and body fossils. I’ve seen big flat rocks that show the bottom of a shallow sea, with ripple marks, the tracks of tiny animals that trundled around looking for food in the sandy mud, and the occasional fossil like a bryozoan or fragment of shell. It’s the closest thing we have to photographs of prehistoric times.