It’s the last episode of 2017 and we’re going out in style, learning about some unusual horses!

A Przewalski’s horse PHOTO TAKEN BY ME AT HELSINKI ZOO I cropped out as many poops as I could: 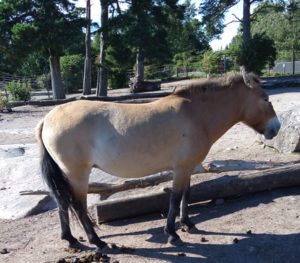 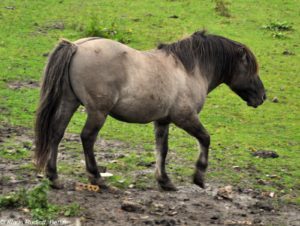 A Moyle breed horse with a bossed forehead: 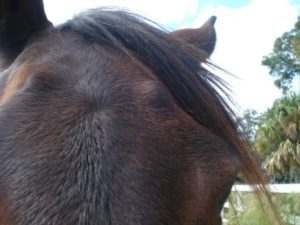 All domestic horses are the same subspecies, Equus ferus caballus, even though the various breeds may look very different. Even mustangs and other populations of wild horses—more properly called feral horses—are the same subspecies. Feral just means a domestic animal that lives like a wild animal, like a stray dog. Only one truly wild horse remains these days, Przewalski’s [pzha-VALski’s] horse, Equus ferus przewalskii. I’ve been pronouncing it Perzwalski’s horse my whole life until today. So let’s start the episode by talking about that one.

Przewalski’s horse is native to the steppes of central Asia, especially Mongolia. It’s currently considered a subspecies of horse, but some researchers think it should be its own species. It went extinct in the wild in 1969. Fortunately, in 1900 15 of the horses had been captured and sold to various zoos. Some of the pairs reproduced, but by 1945, only 13 of the descendants remained. Of those 13, two were hybrids, one of them with a domestic horse, one of them with a tarpan. More about tarpans in a minute. Nine of the 13 were used in a careful breeding program, which was so successful that by 1992, Przewalski’s horse started to be reintroduced to the wild.

I’ve seen Przewalski’s horses, by the way. They had some in the Helsinki Zoo. Check the show notes for a picture taken by me and not swiped by me off the internet.

Przewalski’s horse is stockier than domestic horses, dun in color with a pale belly, with a short, erect mane. The legs are frequently faintly striped. The average horse stands about 13 hands high at the withers, which is the shoulder hump, or four feet four inches, or 132 cm. Its social structure is pretty much the same as the domestic horse’s. It lives in bands consisting of a group of mares and their young, and a stallion that leads the band to grazing areas and water while keeping watch for danger. A solitary stallion may sometimes challenge a stallion with a band of mares, which leads to a fight, which is pretty much the basis of 80% of the horse stories I read as a kid. So exciting.

So what about the tarpan? It was also called the Eurasian wild horse, and it went extinct—for good, unfortunately—in 1918 at the very latest, but probably much earlier. Its scientific name is Equus ferus ferus, and it’s probably the wild horse that gave rise to the modern domesticated horse. But we don’t know for sure, because we don’t know for sure that the tarpans alive in the 18th and 19th centuries were even real tarpans. They might have been hybrids of local domestic horses and Przewalski’s horses, or just feral domestic horses.

We do know that wild horses lived throughout Europe and parts of Asia during the Pleistocene. We have cave paintings 30,000 years old that are so good, scientists can determine a lot about the wild horse’s conformation and coat patterns and colors. We know our ancestors killed and ate horses long before anyone realized how useful it would be to tame such a strong animal and let it do the hard tasks of pulling carts and plows. The horse was domesticated about 6,000 years ago in various places at different times across Eurasia, and it’s possible that different subspecies of horse were domesticated, of which the tarpan was one. But we’re not sure how many subspecies of wild horse there were. We know about Przewalski’s horse since it’s still around, and we know a fair bit about the tarpan because it survived well into modern times. There were probably others, including what might be a type of tarpan that lived in forests.

There’s an interesting etymological fact that might point to the forest tarpan as a distinct type of wild horse. This comes from Willy Ley’s marvelous book, The Lungfish, the Dodo, and the Unicorn, which I’ve read numerous times since I was a kid. A lot of the information is dated since it was first published in the 1940s, but it was cutting edge at the time. Also, the book was already old when I was a kid. I’m not that old. Anyway, Ley writes that there was an unusual Bavarian insult used when someone in southern Germany wanted to call someone else stupid. In other parts of German-speaking Europe, a stupid person is called an Esel, or donkey. But the Bavarian term is Waldesel, which means forest donkey. Ordinary donkeys are called Steinesel, or rock donkey. So some researchers think, or thought 80 years ago, that the Waldesel referred to the forest tarpan. It was supposed to be gray with a black stripe down the spine called an eel stripe, and like other wild horses had a big, donkey-like head.

At some point, when horses were fully domesticated, the wild horses became a pest. They stole domestic mares and ate fodder meant for livestock. So not only were they hunted for meat, they were killed just to get rid of them. By the late 19th century, tarpans were already rare, whether they were really wild horses or hybrids of wild and domestic horses. The last one was killed in the wild in 1879 or the first few days of 1880, the last one in captivity died in the early 20th century—reports vary as to whether it was in 1909, 1917, or 1918, and there are some doubts that these last horses were actually tarpans.

So is the tarpan really extinct? If you go online you can find tarpans for sale. What’s up with that?

As early as 1780, people realized the tarpan needed help to survive. That’s when the Polish government established a wildlife park to protect the tarpans living there, but it closed in 1806 and the horses were given to local farmers. A small number of tarpans were kept in zoos. In the 1930s and after, people have tried to breed a horse that closely resembles the tarpan, starting with domestic stock that probably have recent tarpan ancestors. Various breeds of horse have resulted, notably the Heck horse, often called a tarpan. It isn’t really a tarpan, but it sure is beautiful.

There are many horses in folklore, from Pegasus to the kelpie, centaurs to unicorns, but very few actual mystery horses. I looked, believe me. The kelpie, if you’re unfamiliar with the term, is a Scottish water spirit that sometimes appears as a pony with a sopping wet mane. Don’t try to catch it. The second you touch it, it’ll drag you into the water and drown you.

Every so often there are reports of a horse with a pair of horns on the forehead. Sometimes they’re described as tiny, although older accounts are more sensational. For instance, an 1837 account from a South American explorer talks about a horse with four-inch long horns like a bull’s, and another with horns three inches long. That would be about 8 cm to 10 cm.

Well, there are a few breeds of horse with what are called bossed foreheads. Basically this means the forehead sometimes has a pair of bony bulges or points above the eyes or near the ears that do look like tiny fur-covered horns like those seen in giraffes, or horn buds where horns could grow. Sometimes a horse will have only one of the bumps, but mostly they grow in pairs. Moyle horses, a North American breed, have the bossed forehead, as do the Datong from China and the Carthusian Andalusians. All three of these breeds are rare. Sometimes the trait appears in other breeds.

Now, these are no three- or four-inch horns. They’re just little bumps maybe a centimeter or so long, or about half an inch. It’s also not clear whether they’re real horns or just calcium deposits of some kind, but since they do seem to be situated consistently in spots where horns could reasonably expect to grow, it’s possible they are due to a genetic glitch that fails to fully suppress an ancient gene sequence that once grew horns. The problem is, as far as we know, there are no horse ancestors that ever grew horns.

While warts and bumps are as common in horses as they are in any mammal, this particular kind of horn-like bump doesn’t seem to appear anywhere else on a horse, even on those with bossed foreheads. A bossed forehead is also supposedly linked with high endurance, but as far as I know there are no real studies about the condition. So if you know someone who’s thinking about going into veterinary medicine, zoology, or a related field, suggest bossed foreheads as a particular topic of study. And then tell them to let me know their findings.