Let’s finish off a very weird year and welcome in the new year with a basket of colorful frogs!

The northern leopard frog comes in many color morphs, all of them pretty: 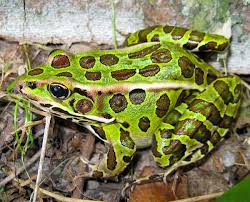 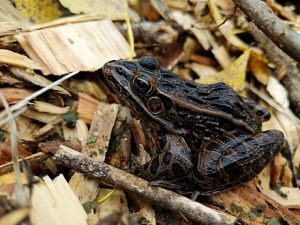 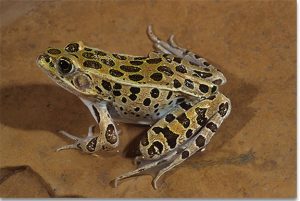 The starry dwarf frog is also pretty and has an orange tummy: 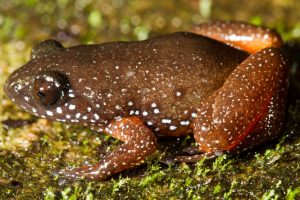 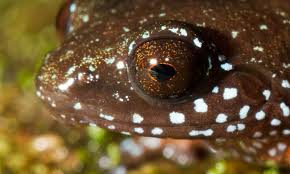 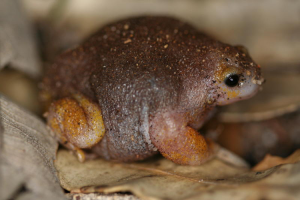 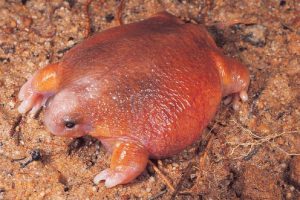 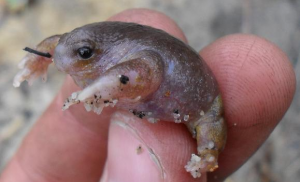 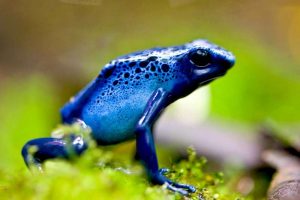 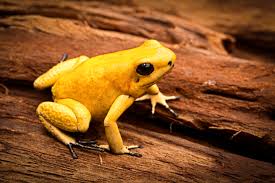 The tomato frog looks like a tomato that is also a frog: 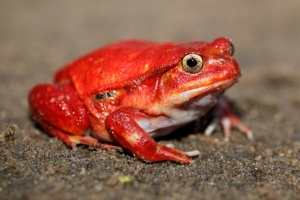 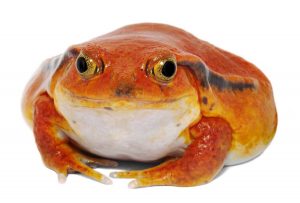 It’s the very last week of 2020, and good riddance. Let’s kick the old year out the back door and welcome in the new year with a basket of pretty frogs. That’s right, we’ve got a frog episode this week!

Let’s start with the northern leopard frog, with thanks to an anonymous reviewer who gave the podcast a really nice five-star review and only signed the review “norhern lepord frong.” I looked that frog up online to see what it looked like, and it’s so pretty, honestly, it’s just the prettiest frog! If you had a basket of northern leopard frogs, they might just look like friendly flowers, because while most are green or brown with darker spots, some are much brighter green with yellow markings, some are dark brown, and some are even pinkish white because of a rare albino trait. Its spots are outlined with yellow or light green and it has two folds of skin that run the length of the body and are sometimes yellow. These folds of skin are called dorsolateral folds and many frogs have them, although they’re not always as easy to spot as in the northern leopard frog.

The northern leopard frog is native to the northern part of North America, especially southern Canada and the northern and western United States. It grows up to 4.5 inches long, or 11.5 cm, measured from snout to vent. As you may recall from previous frog episodes, that’s how frogs are always measured. It basically just means nose to butt. Females are larger than males, which is also the case for most frogs.

It lives anywhere that it can find fresh water, including rivers, streams, creeks, ponds, marshes, even drainage ditches, but it prefers slow-moving or quiet water. As a result, it’s threatened by loss of habitat, pollution, and climate change, all of which affect the water it needs to live, and it’s also threatened by non-native animals and diseases. But while it doesn’t live in as many places as it used to, right now it’s doing fine overall and isn’t considered endangered.

Like most frogs, the northern leopard frog eats insects and any other small animal it can swallow. It has a long sticky tongue that it can shoot out so quickly that even an insect can’t outfly it, but it doesn’t just eat insects. It’s a big frog with a big mouth, and it’s been recorded eating other species of frog, small snakes, small birds, and even a bat. But mostly it eats insects, slugs, snails, and worms. Probably the frog that was documented as catching and eating a bat is famous in the northern leopard frog world, or at least it would be if real life was like the inside of my head and frogs had their own tiny newspapers.

The northern leopard frog was once considered a delicacy, with most frogs’ legs coming from this particular species. It’s also sometimes kept as a pet. It’s mostly nocturnal and semi-aquatic, sometimes called the meadow frog because it will leave the water to hunt for food in grassy areas. It hibernates in winter but is better adapted to cold weather than a lot of frogs are.

Male leopard frogs, like many other frogs, have special vocal sacs in the throat that allow a male to make a loud call in spring to attract females. Different species of frog have different calls, naturally, and the vocal sacs are shaped differently in every species. The male leopard frog, northern and southern, has two vocal sacs that he fills with air like balloons, which amplifies the sound of his voice and makes it much louder.

This is what a northern leopard frog sounds like:

Another colorful frog is from India and was only discovered in 2010. A team of scientists surveying the mountains for reptiles and amphibians noticed a teensy frog in the leaf litter one night. Its back was brown with light blue dots that looked like stars in a night sky, but its belly was orange like a sunset. It’s a very pretty frog.

The researchers caught several of the frogs and thought they were pretty but not especially unusual. There are at least 400 known frogs in India and new species are found pretty frequently. The team named it the starry dwarf frog because of the blue dots and its size, less than 20 mm long, or around half an inch. That’s about the size of an adult’s thumbnail.

After the expedition, though, when the team examined the frogs more closely, they realized they had something different from other frogs. It didn’t seem to be related to any other frog species in India or anywhere else. A genetic analysis indicated that the starry dwarf frog is literally not closely related to any frog alive today. For millions of years India was a big island after it separated from Madagascar and Africa but before it collided with mainland Asia, so many species evolved independently from species in other parts of the world. Scientists hope to learn more about the starry dwarf frog to learn more about how other frogs evolved.

Let’s move on to another colorful frog, and a very weird one, the turtle frog. Simon brought this one to my attention, so thank you, Simon! This frog gets its name because it sort of looks like a tiny turtle without a shell.

The turtle frog lives in western Australia in areas that are much dryer than most frog habitats. Its body is bulbous with strong, stubby legs that allow it to burrow into the sand. Generally, when a frog burrows into sand or mud it does so by moving backwards, digging itself deeper with its strong hind legs. But the turtle frog digs forward, using its front legs to dig. Turtles are also forward diggers. Unlike most other frogs, the turtle frog doesn’t have long hind legs that it uses for jumping. It just has short legs in front and back.

It ranges in color from brown to reddish-brown to pink and it grows up to 2 inches long, or 5 cm. Its head is small, rounded, and distinct from the body, like a baby turtle’s head sticking out from its shell–but without a shell, without a beak, and with small black-dot eyes.

Obviously the turtle frog isn’t related to the turtle at all. Turtles are reptiles while frogs are amphibians. The turtle frog has adapted to a semi-arid climate and a diet of termites by evolving the ability to dig deep burrows, some of them almost four feet deep, or 1.2 meters, and the ability to break into termite nests. As a result, its body plan is different from most other frogs.

That’s not all that’s different, though. Most frogs lay eggs in water, which hatch into tadpoles that live in the water until they metamorphose into small frogs. The turtle frog doesn’t have that kind of luxury. It doesn’t have a lot of water most of the time, so it hatches into a tiny froglet instead of a tadpole.

You may have heard the story that natives of South America would rub the tips of their darts or arrows on these frogs to transfer the frogs’ toxic secretions to the weapons. That’s where the name poison dart frog comes from. That’s sort of true, but not completely true. Not all poison dart frogs were used in this way, just four of the largest species that are especially toxic.

One of these four species is the golden poison dart frog, which lives in the rainforests of Colombia. It’s usually bright yellow with black eyes, although some individuals are a minty green or orange. It looks cheery, but a single frog has enough poison to kill two African elephants, not that it would because it lives in South America and not Africa and the elephants would not try to eat the frog. One frog has enough poison to kill 10 to 20 humans, though, so don’t try to eat one. In fact, don’t even touch it, because poison dart frogs store their poison in skin glands and if a frog feels threatened, it will secrete a tiny amount of the poison. If that poison gets into your body, you will die.

So why do people keep golden poison dart frogs as pets? That would be like having a pet stick of dynamite, right? Actually, it turns out that frogs born in captivity don’t develop the toxins that wild frogs have. Frogs that are captured in the wild and kept in captivity will eventually lose the toxins, although it may take several years. This is because the frog doesn’t manufacture the toxins itself but retains toxins found in some insects it eats, although researchers aren’t sure yet which insect or insects.

The golden poison dart frog lays its eggs on the ground. This sounds weird until you remember that it lives in a rainforest and the ground is covered with dead leaves that are constantly wet from rain. When the eggs hatch into tadpoles, though, they need more than just wet leaves, so the parent frogs squat down and the tadpoles wriggle onto the parents’ backs. They stick there and the parents carry them not to a pond but up into the trees. Water collects in the middle of large leaves of some rainforest tree species, and of course there are always little hollows and holes in tree trunks that can fill with rainwater. The frogs deposit the tadpoles into these little puddles, where the tadpoles eat mosquito larvae and algae. But even then, the parents don’t abandon their babies. Golden poison dart frogs are social animals, not generally a trait you associate with frogs, and they live in little groups of around half a dozen individuals. When the tadpoles finish developing and metamorphose into adult frogs, the parents lead their babies to other golden poison dart frogs so they can join a group.

Finally, our last colorful frog of the episode and the very last animal we’ll cover for 2020 is the tomato frog. As you might have guessed, the tomato frog is red-orange in color. It lives in Madagascar and a big female can grow up to 4 inches long, or 10.5 cm. Males are much smaller and are more yellow than red. But the tomato frog doesn’t use its coloring to hide among tomato plants. Its coloring advertises that it’s toxic, although its toxin is much different from those found in poison dart frogs and not deadly.

The tomato frog mostly eats worms and termites, which it finds by digging around in the leaf litter. It also catches insects with its sticky tongue. It’s not a very good swimmer, surprisingly, and spends most of its time on land or in swampy areas. It’s a mostly nocturnal frog.

If a tomato frog feels threatened, it will puff itself up to appear larger, which also incidentally makes it look even more like a tomato. It will also secrete a sticky white toxin that irritates a predator’s mucus membranes and can cause serious allergic reactions in humans. The toxin is so sticky that it will remain in the predator’s mouth for days. So if you live in Madagascar and have a tomato garden, carefully examine every tomato before you take a bite.