Thanks to Enzo and Lux for their suggestions! Let’s learn about the sun bear and the water bear this week! 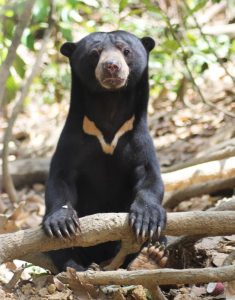 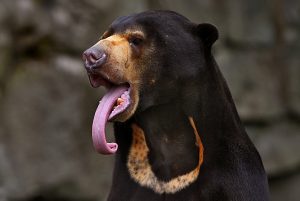 The water bear, AKA tardigrade, is not actually a bear. For one thing, it has twice the number of legs as bears have: 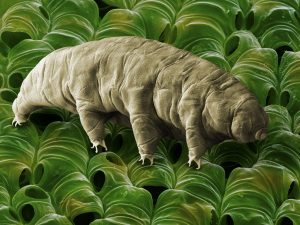 It’s summer in the northern hemisphere, which means hot weather and sunshine and, if you’re lucky, a trip to the lake or ocean. To celebrate summertime, let’s talk about two animals suggested by Enzo and his sister Lux. They wanted to hear about the sun bear and the water bear. Get it? Sun and water?

Enzo’s suggestion is the sun bear, which we talked about a little bit way back in episode 76, but which is a fascinating animal that deserves a lot more attention.

The sun bear lives in southeast Asia in tropical forests and is most closely related to the black bear. It has silky black fur, although some are gray or reddish, and a roughly U-shaped patch of fur on its chest that varies in color from gold to almost white to reddish-orange. Its muzzle is short and is lighter in color than the rest of its face, usually gray. It has small ears too. It’s the world’s smallest bear, only around three feet long from head to tail, or 150 cm, and four feet tall when standing on its hind legs, or 1.2 meters. Researchers think its chest spot acts as a threat display. When a sun bear stands on its hind legs, the chest spot is really obvious, which may warn potential predators away. Even so, tigers and leopards will attack and eat sun bears.

The sun bear spends a lot of time in trees, more than any other bear. It has long claws that it uses for climbing and to tear open logs to get at insect larvae. It eats a lot of termites and especially loves honey, which it licks from the hive with its long tongue–up to 10 inches long, or 25 cm. It also eats a lot of plant material, especially fruit and acorns. It will catch and eat birds and small animals, or sometimes larger animals like deer, but it mostly eats insects and fruit.

The female sun bear makes her den in a hollow tree to give birth. She has one or two cubs at a time, and like other bear cubs they’re born extremely small and with their eyes and ears sealed shut. This is the case with animals like dogs and cats too, but newborn bears are tiny compared to how big the mother bear is. The eyes and ears continue developing after the cub is born, but it’s a few months before it can see and hear properly. A cub remains with its mother for almost three years.

Other than mothers and babies, the sun bear is solitary. Adults don’t typically interact except to mate, although adult sun bears kept in captivity will play together. A 2019 study of sun bears came to a surprising conclusion that they communicate with each other by mimicking facial expressions. This is something humans do all the time, of course, and apes do too. Dogs also mimic facial expressions. Humans, apes, and dogs are all intensely social animals, so researchers have always assumed that the mimicking of facial expressions is important because of that sociability. I mean, that just makes sense. If you see a friend approaching and they have a big smile on their face, naturally you’re going to smile too. But here are these solitary bears with facial communication just as well-developed as in apes. Researchers think it may be a trait that’s so important to mammals as a whole that it develops even in species that don’t spend a lot of time interacting.

The sun bear is threatened by habitat loss and hunting, but it does well in captivity and is popular in zoos. Conservation efforts are in place to protect the sun bear in the wild as well as continue a healthy captive breeding program around the world.

Lux wanted to hear about the water bear, which is also called the tardigrade or the moss piglet. I can’t believe we haven’t covered the tardigrade before—we even have one in our new logo! Patrons may remember parts of this section from a Patreon bonus episode from 2017, but I’ve updated it a lot.

The water bear isn’t a bear at all but a tiny eight-legged animal that barely ever grows larger than 1.5 millimeters. Some species are microscopic. Pictures of the water bear are taken with an electron microscope because otherwise they just look like a teensy little dot.

There are about 1,300 known species of water bear and they all look pretty similar. It looks for all the world like a plump eight-legged stuffed animal made out of couch upholstery. It uses six of its fat little legs for walking and the hind two to cling to the moss and other plant material where it lives. Each leg has four to eight long hooked claws. It has a tubular mouth that looks a little like a pig’s snout or a bear’s snout.

An extremophile is an organism adapted to live in a particular environment that’s considered extreme, like undersea volcanic vents or inside rocks deep below the ocean floor. Tardigrades aren’t technically extremophiles, but they are incredibly tough. Researchers have found tardigrades in environments such as the gloppy ooze at the bottom of the ocean to the icy peaks of the Himalayas. It can survive massive amounts of radiation, dehydration for up to five years, pressures even more intense than at the bottom of the Mariana Trench, temperatures as low as -450 Fahrenheit, or -270 Celsius, heat up to 300 degrees Fahrenheit, or 150 Celsius, and even outer space. It’s survived on Earth for at least half a billion years. Mostly, though, it just lives in moss.

One thing to remember is that different species of tardigrade are good at withstanding different extreme environments. Not every tardigrade is able to do everything we just talked about. They’re tough, but they’re not invulnerable. Many species can withstand incredible heat, but only for half an hour or less. Long-term temperature increases, even if only a little warmer than it’s used to, can cause the tardigrade to die.

Most species of tardigrade eat plant material or bacteria, but a few eat smaller species of tardigrade. It has no lungs since it just absorbs air directly into its body by gas exchange. It has a teeny brain, teeny eyes, and teeny sensory bristles on its body. Its legs have no joints. Its tubular mouth contains tube-like structures called stylets that are secreted from glands on either side of the mouth. Every time the tardigrade molts its cuticle, or body covering, it loses the stylets too and has to regrow them. In some species, the only time the tardigrade poops is when it molts. The poop is left behind in the molted cuticle.

The tardigrade’s success is largely due to its ability to suspend its metabolism, during which time the water in its body is replaced with a type of protein that protects its cells from damage. It retracts its legs and rearranges its internal organs so it can curl up into a teeny barrel shape, at which point it’s called a tun. It needs a moist environment, and if its environment dries out too much, the water bear will automatically go into this suspended state, called cryptobiosis.

The tardigrade’s DNA gets fractured during dehydration but it’s incredibly successful at repairing its DNA upon rehydration, which explains a big part of its success. In 2016, Japanese researchers sequenced the genome of the species of tardigrade that best resists radiation. In the process, they discovered a new protein in the tardigrade’s genome, which they named DSUP, short for damage suppressor. Even more interesting, when cultured human cells were given the ability to create DSUP, after exposure to X-rays, they showed half the DNA damage that non-DSUP cells showed.

Tests in 2007 and 2011 that exposed tardigrades to outer space led to some speculation that tardigrades might actually be from outer space, and that they, or organisms that gave rise to them, might have hitched a ride on a comet or some other heavenly body and ended up on earth. But this isn’t actually the case, since genetic studies show that tardigrades fit neatly into what we know of animal development and evolution.

The tardigrade is probably most closely related to arthropods, like insects and spiders. Their closest relatives were probably lobopodians, extinct wormlike organisms with stubby legs. The famous Hallucigenia creature is a lobopodian, which we talked about in episode 69 about the Cambrian explosion. There’s still a lot we don’t know about the tardigrade’s ancestry, since we have so few fossilized water bears, but many researchers think their oldest ancestors were probably much bigger than the microscopic or nearly microscopic living animals. In other words, maybe once there were water bears you could pick up and hug. Well, they probably weren’t that big, but I like to imagine it. I think that if you hugged a water bear too hard, it would make this noise: [little prrrt sound]

You can find Strange Animals Podcast at strangeanimalspodcast.blubrry.net. That’s blueberry without any E’s. If you have questions, comments, or suggestions for future episodes, email us at strangeanimalspodcast@gmail.com. If you like the podcast and want to help us out, leave us a rating and review on Apple Podcasts or Podchaser, or just tell a friend. We also have a Patreon at patreon.com/strangeanimalspodcast if you’d like to support us that way, and don’t forget to join our mailing list. There’s a link in the show notes.