Thanks to Isaac, Joel, Ethan, and Richard E. for their suggestions this week!

Don’t forget to check out our crowdfunding campaign for some cute enamel pins!

One example of a pistol shrimp–there are many, many species (photo from this site):

A walnut sphinx moth sitting on someone’s hand (photo by John Lindsey, found on this page): 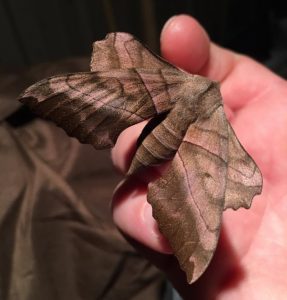 A caterpillar (photo by Ashley Bosarge, found on this page): 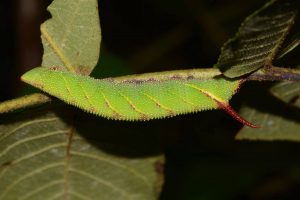 The Asian longhorned beetle (from this site): 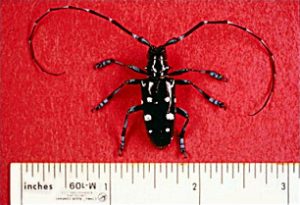 The white-spotted sawyer pine beetle is another type of longhorned beetle: 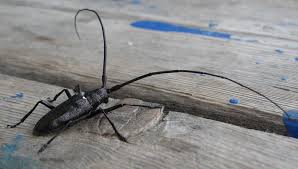 It’s been too long since we’ve had an invertebrates episode, so this week let’s learn about some invertebrates that make noise. Thanks to Isaac, Joel, Ethan, and Richard E. for their suggestions!

We don’t have a birthday shout-out this week, but we do have a reminder that the next five episodes, the ones releasing in May, are our Kickstarter episodes! Those are from the Kickstarter level where the backer got to choose the topic and work with me to craft the episode. I’ve been amazed at how fantastic those episodes turned out, and I think you’ll like them.

Speaking of crowdfunding campaigns, a quick reminder that the Tiny Pin Friends Indiegogo is still going on. It’s sort of stuck halfway to our goal, probably because I got busy with the book release and haven’t been telling people about the pins, so if you want to take a look at the pin designs, there’s a link in the show notes. Thanks!

Now, on to the invertebrates! Both Isaac and Joel suggested the same topic at different times, pistol shrimp. This is a group of shrimps also called snapping shrimps. Most species live in warm, shallow coastal habitats like coral reefs, but some live in colder water and at least one lives in freshwater caves.

The pistol shrimp only grows a few inches long at most, or about 5 cm. It gets its name from its big claw, which functions in a similar way to the workings of a pistol (sort of). But instead of shooting bullets, the claw shoots bubbles—but so incredibly fast, they might as well be bullets.

A pistol shrimp has two claws, but one is small and used for picking stuff up and grabbing food. The other claw is the pistol claw that’s much bigger and stronger. Which claw is which depends on the individual, and if a shrimp’s pistol claw gets damaged or bitten off, its other claw will develop into a pistol claw. The damaged or lost claw eventually regenerates into a little claw for manipulating food.

The pistol shrimp is mostly an ambush hunter. It will hide in a burrow or rock crevice with its antennae sticking out, and when a small animal like a fish happens by, the shrimp will emerge from its hiding place just far enough to get a good shot at the animal. It opens its big claw and snaps it shut so fast and so forcefully that it shoots tiny bubbles out at speeds of over 60mph, or 100 km/hour. Obviously the bubbles don’t travel very far at that speed, really only a few millimeters, but it’s powerful enough at this short range to stun or outright kill a small animal. The shrimp then grabs its stunned or dead prey and drags it back into its hiding spot to eat.

The process is way more complicated than it sounds. When the claw opens, water rushes into a tiny chamber in the claw. When it snaps closed, a tiny point on the claw pushes into the chamber, which leaves no room for the water. The water is therefore forced out of the chamber at such incredibly high pressure that it leaves vapor-filled cavities in the water, the bubbles, which collapse with a loud snapping sound. The pressure wave from the collapsing bubble is what actually kills or stuns an animal. Physics! I don’t understand it! Check the show notes for an article that goes into more detail about this process, which I’ve hopefully described correctly.

The bubble’s collapse makes such a loud noise that the pistol shrimp is one of the loudest animals in the ocean, but the sound lasts for less than a millisecond. It takes 100 to 400 milliseconds for you to blink your eye, to give you a comparison. The collapsing bubble also produces light and intense heat, but it’s such a tiny bubble with such a limited range that the heat and light don’t make any difference. The light isn’t very bright and lasts such a tiny amount of time that the human eye can’t even perceive it.

The pistol shrimp doesn’t only use its big claw to hunt for food and defend itself from potential predators. It also communicates with other pistol shrimp with the sound, and pistol shrimp can live in colonies of hundreds of individuals. With them all snapping together, no matter how short each snap is, the collective sound can be incredibly loud—so loud it interferes with sonar in submarines.

This is what it sounds like, although it also kind of sounds like popcorn popping, if you ask me:

Next, Ethan suggested the walnut sphinx moth, because his son found one, they looked it up, and they were both amazed at how awesome it is. It lives in the eastern part of North America and is a big, robust moth with a wingspan up to 3 inches across, or 7.5 cm. Its wings and body are mostly brown and gray, often with darker and lighter markings but sometimes all one color. The edges of its wings have an uneven scallop shape and when it perches, it spreads both pairs of wings out in a sort of X shape. Its wing shape and coloring make it look a lot like an old dead leaf.

Like many moths, the walnut sphinx moth doesn’t eat at all as an adult. After it metamorphoses into an adult, it only lives long enough to mate and lay eggs. It spends most of its life as a caterpillar, where it eats the leaves of various kinds of trees, especially nut trees, including walnut, hazelnut, and hickory. The caterpillar is a pretty green with tiny white dots all over and yellow or white streaks along its sides, although some individuals are red, orange, or pink instead of green. It has a red or green horn on its tail end.

The most amazing thing about this moth is how the caterpillar keeps from being eaten. Lots of animals like to eat caterpillars, especially birds, but when a bird tries to grab this caterpillar, it thrashes around and actually makes a sound! You don’t typically think of caterpillars as noisy. It’s actually not very loud, but it does make a little whistle that mimics a bird’s alarm call, and can make a little buzzing sound too. The caterpillar makes the sound through its breathing tubes, called spiracles.

Researchers have played the caterpillar’s whistle sound at bird feeders and the birds react as though they’re hearing a bird making an alarm call.

Richard E. recently tweeted some amazing pictures of beetles and suggested we cover more beetles, and I totally agree! We’ll finish with a beetle that makes this weird creaky sound:

The Asian longhorned beetle is sometimes called the starry sky beetle because it’s black with white dots. It’s native to eastern China and Korea, but it’s an invasive species in North America, parts of Europe, and other parts of Asia. It can grow about an inch and a half long, or 4 cm, but its antennae are up to twice as long as its whole body.

The female chews little holes in the bark of a tree and lays a single egg in each hole. When the larva hatches, it burrows deeper into the tree, eating sap and wood, until it’s ready to pupate. When it emerges as an adult, it chews its way out of the tree for the first time in its life, and flies away to find a mate. It especially likes poplar, maple, and willow trees. If enough beetle larvae are eating their way through a tree, the tree becomes weakened and can lose branches or even die.

There are lots of other species of longhorned beetle, though, and a lot of them make creaky scraping sounds. The male has ridges on his head that he scrapes along his thorax to attract a mate.

The white-spotted sawyer, also called the pine beetle, is native to North America and is black with a single white spot at the base of the wings, and sometimes with more white spots on the wings. It looks a lot like the Asian longhorned beetle but has black antennae whereas the Asian beetle has black and white antennae.

Like the many other longhorned beetle species, the female chews little holes in a tree to lay eggs in, but in this case she prefers pine and spruce trees, especially ones that are dead or dying or have sustained fire damage. The male white-spotted sawyer finds a good tree and defends it from other males, and if a female likes the tree she’ll mate with the male. But while the male keeps other males away, other females sometimes sneak in and lay eggs in the holes the female has already chewed in the tree. These nest holes take a long time to make and if a female can sneak some of her eggs into holes another female has already made, it saves her a lot of effort.

In addition to the male making a creaking noise to attract a mate, longhorned beetle larvae just generally make a lot of noises as they chew their way through a tree. If you’re ever walking through the woods and hear this sound, now you know what it is: