This week we’re in Ireland learning about the dobhar-chú, a vicious creature that might be an otter but might be a KING otter! Either way, it’s a killer. 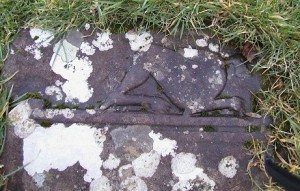 How can such an adorable floof be so MURDEROUS? Eurasian otter: 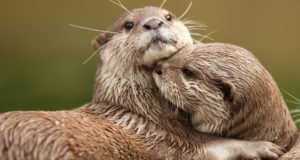 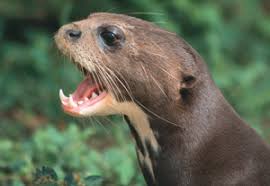 The Search for the Last Undiscovered Animals by Karl PN Shuker

We’re one week closer to Halloween, and it’s time to learn about a mysterious, deadly animal from Ireland called the Dobhar-chú (pronounced do-war-coo). Appropriately enough, our story starts in a graveyard.

Conwall Cemetery is in the town of Drummans, near the valley of Glenade. In the cemetery is a sandstone grave marker lying flat on the ground. It’s about 4 ½ feet wide and nearly two feet high, or 1.37 by .6 meters, and is dated September 24, 1722. The name on the stone is Grace Con, wife of Ter MacLoghlin. But the main part of the stone is made up of a carving of an animal.

I’ll put a picture of the carving in the show notes. It’s not very clear, but basically, it looks like a heavy-bodied dog with limbs folded beneath it as though it’s crouching. It has a long tail although that has mostly worn off. Its head is small, with tiny ears, and its neck is folded back so that its head lies along its back. A hand holds the hilt of a sword that is plunged into the animal’s neck, with the tip of the sword just visible below the belly.

There are various stories and poems about what happened to Grace Con, or Grace Connolly, but they’re all basically the same. Incidentally, it was Gaelic custom for women to retain their maiden names, which is why Grace’s last name doesn’t match her husband’s.

One morning Grace went down to the lake either to wash or to do laundry, reports differ. When she didn’t return home, her husband Terence McGloughlan went to find her. But when he reached the lake, he found his wife’s body–with a monstrous animal, the dobhar-chú, feeding on it. Terence killed the beast, but as it died it gave a piercing whistle or squeal. The squeal was answered by another animal from the lake, which surfaced and charged Terence.

He fled home just ahead of the monster, leaped on his horse, and galloped away with the monster pursuing. Eventually his horse tired, so Terence dismounted and turned the horse sideways across the road to act as a sort of shield. When the dobhar-chú ducked to run beneath the horse’s belly, Terence stabbed it through the heart.

Dobhar-chú is an Irish term meaning water-hound. It’s used as a name for the Eurasian otter, but can also refer to something called a master otter or king otter. But before we go any farther, let’s get some background on the otters that live in Ireland and Scotland, since the legend of the dobhar-chú is known in both places.

The Eurasian otter lives throughout Europe and Asia. It’s shy, solitary, and territorial. It’s a pretty big animal, and some big adult males can grow as long as four and a half feet, or 1.4 meters, including the tail. Females are smaller. The otter’s toes are webbed, which makes it a good swimmer. It’s dark brown above, grayish-brown below, with white or cream-colored markings around the throat and cheeks. It has a long, slender body and flattened head with tiny ears and sensitive whiskers. Oh, and it’s incredibly cute. Oh my gosh is it cute.

The otter eats fish, frogs, and invertebrates like crayfish. It lives in rivers and lakes and likes plenty of cover around the water’s edge. While it prefers fresh water, it will enter the ocean, but it needs fresh water both to drink and to clean salt from its coat. It’s usually nocturnal and is especially active at dusk and dawn, although if an otter’s territory is along the coast it will be more active during the day since it forages in rock pools at low tide for fish and invertebrates. Sometimes people call otters who live along the coast sea otters, but in Great Britain and most of Europe they’re the same type of otter that lives in freshwater.

Instead of having one den, an otter’s territory has a number of places where it sleeps or just hangs out. Above-ground areas are called couches and are well hidden in dense vegetation and frequently on small islands. Underground areas are called holts. A holt might be dug into a river bank, among a big tree’s roots, or just be a crevice among fallen rocks. A mother otter will have her babies in a holt that’s fairly remote from her usual activities. She usually has two or three babies at a time, called cubs.

An otter marks its territory with droppings that actually smell nice, like new-mown hay. I have not smelled them myself so I can’t vouch for this. The droppings are called spraints. While otters were once common throughout Europe, they’re much rarer these days, mostly because they can’t live in polluted streams, and these days they are totally protected. You’re not even allowed to damage an otter’s couch or holt, much less the otter itself.

Now we know about the otter, but what’s a master otter? According to Irish and Scottish folklore, it’s basically a super-otter. It’s much larger than a regular otter and sometimes appears with scores of regular otters as though leading them, and it may have some magic powers. Carrying its pelt, or part of its pelt, is said to protect someone from injury or shipwreck. One description says it’s white except for black ear tips and a black cross on its back, another says it’s half wolf, half fish. One account from 1684 calls it an Irish crocodile and describes it as “of the pitch of an ordinary greyhound, of a black slimy skin, without hair,” and says it’s also called a water-dog or Anchu. Whatever it is, it’s rare and dangerous.

So what might it be? As it happens, there is a species of otter that sounds a lot like the dobhar-chú. It’s called the giant otter, and while these days a big male is not much more than about 5 and a half feet long, or 1.7 meters, in the past before they were nearly driven extinct for their fur, big males sometimes grew eight feet long, or 2.4 meters. Those lengths don’t even include the tail. The giant otter is brown or reddish in color, but when it’s wet it looks black. It has a white pattern on its throat that individuals use to identify each other, because unlike other otters, the giant otter is social, communicates with its clan members with whistles and other noises, is mostly active during the day, and can be aggressive. All this sure sounds like the dobhar-chú. The only problem is, the giant otter lives in South America, an entire ocean away from Europe.

Could a similar species of giant otter have once lived in Ireland and Scotland? We don’t have very many otter fossils, unfortunately–but we do have a recently discovered fossil of a new otter species from China. It’s been named Siamogale melilutra and it’s twice the size of the giant otter. From its teeth, it probably ate a lot of freshwater shellfish. The fossil dates to 6.24 million years ago, so it’s not likely that it was running around in Ireland in the early 18th century. But it’s interesting to know that really big otters did once exist in Asia, so it’s always possible that a species of rare giant otter also lived in parts of Europe until fairly recently.

Of course, it might be that the dobhar-chú really is just a folktale and not based on a real animal at all. Some accounts of a king otter say it’s the seventh cub of an ordinary otter, and the king otter’s magical attributes also push it farther into the realm of folklore than objective reality. It’s also possible that the dobhar-chú and the king otter are completely different animals, one real, one a folktale, with some confusion between the two since that’s just how people think.

I’m inclined to think that might be the case. So if we assume that the dobhar-chú is just an unusually large otter, does it fit the reported story? Do otters ever attack people?

Otter attacks are extremely rare, and usually only occur if a mother otter feels someone is threatening her cubs. In North America, where the river otter is very similar to the Eurasian otter, only 44 documented cases of an otter attacking a human have been recorded since 1875. Then again, when an otter does attack it can actually kill a human. Heck, the North American river otter occasionally kills alligators. An otter’s bite is similar in strength to that of a big dog, and it will chase people for at least a short distance if provoked. It can run 18 mph, or 30 km per hour. Usain Bolt can sprint 28 mph, or 45 km per hour, but most of us are a lot slower no matter how motivated we are.

In August of 2016, a Quebec woman swimming in a lake was attacked by an otter that repeatedly bit her legs until she managed to reach a dock with a ladder. Fortunately the otter didn’t chase her once she left the water. Needless to say, this is extremely unusual behavior for an otter, but it does happen. In 2014 an eight-year-old boy and his grandmother were swimming in a river in Washington state when an otter attacked the boy. When his grandmother came to his rescue, the otter turned on her. In 2013 a woman swimming in Yellowstone National Park was bitten and clawed by an otter. Her face, arms, and hands were bitten and some bones in her right hand broken. Fortunately, all these people recovered fully, but all of them had to spend time in the hospital.

So if Grace Connolly was in the lake back in 1733, bathing or washing clothes, and an otter took exception to her presence, it might well have killed her. The rest of the story might be embellishment or the otter might have also chased or attacked Grace’s husband before he managed to kill it. Either way, I don’t think we need to hypothesize about a rare giant otter in this case. A regular otter in a bad mood is scary enough.

Those little guys are cute as all get out, but don’t get too close. They bite.

Next week we’ll take a look at another water monster, this one from the sea–a weird and hideous two-legged fish thing–as we get closer and closer to Halloween.