This week we take a look at (and listen to) the ivory-billed woodpecker and its close relative, the imperial woodpecker. Is it alive? Is it extinct?

A pair of ivory-billed woodpeckers. Photo taken in 1935: 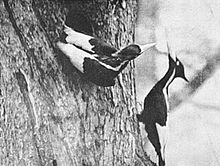 Frames from the alleged ivory-billed woodpecker video taken in 2004. Not super clear there, guys. 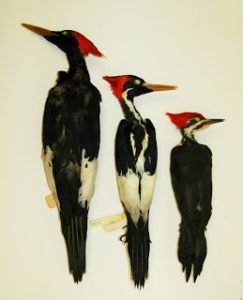 A pair of stuffed imperial woodpeckers: 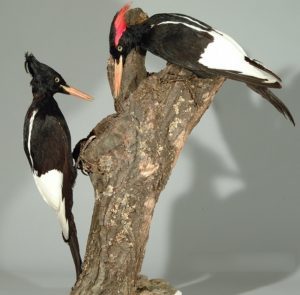 A still from the 1958 video of a female imperial woodpecker. She’s so cute! Her crest bobs around as she moves. 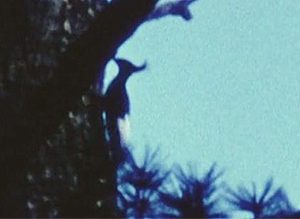 A lot of people who aren’t otherwise into birds have heard of the ivory-billed woodpecker because of the 2004 and 2005 sightings, which were widely reported in the press. Before we talk about that, let’s get some background and discuss the bird itself.

There are actually two ivory-billed woodpeckers, the American bird and the Cuban. Originally they were listed as separate species. They’re big birds, glossy black in color with white markings. The male has a red crest with a black stripe up the front while the female’s crest is all black. They need vast areas of undisturbed forest to thrive, something that’s in short supply these days.

By the early 20th century, the Cuban ivory-billed woodpecker was already restricted to pine forests in the northeast of Cuba due to habitat loss. By the late 1940s it was rare. In 1956 some small populations were still around, but while conservation was urged, the Cuban revolution in 1959 stopped any conservation progress. The last positive sighting was in 1989. The Cuban government designated the area of its sighting as protected, but no one’s seen one since.

Another bird, the imperial woodpecker, is the largest woodpecker in the world. It lives in Mexico and is over two feet long, or 61 cm, with a wingspan of probably around three feet, or about a meter—maybe more. The female’s crest curls forward.

No photographs of a living imperial woodpecker exist. Then researcher Martjan Lammertink found mention in a 1962 letter of video taken of a bird in 1956 by dentist and amateur birder William Rhein. Rhein had become reclusive in his old age and moved with no forwarding address at least once, but Lammertink managed to track Rhein down in 1997, when he was in his late 80s. Rhein died in 1999.

Once Lammertink found him, Rhein produced 85 seconds of 16 mm movie footage he’d taken back in the 1950s, which showed a female imperial woodpecker hitching up a tree and flying away. From those 85 seconds, researchers learned a lot about the bird, helped by a 2010 expedition that pinpointed the exact location where the footage was shot.

There have been numerous sightings of imperial woodpeckers since the 1950s, but the list is discouraging. The sightings taper off slowly in different areas over the decades. The most recent was 2005, but it hasn’t been verified and no photographs were taken.

These days, the areas where imperial woodpeckers once lived are now dangerous to explore due to drug cartels, which grow marijuana and opium poppies in remote clearings with armed guards.

You probably won’t be surprised to hear that the American ivory-billed woodpecker’s story is pretty much the same as the others. It’s an impressive bird, as much as 21 inches long, or 53 cm, with a two and a half foot wingspan, or 76 cm. It likes hardwood swamps and pine forests and was once found throughout the southeastern United States. But as forests were cleared, its habitat grew smaller and more fragmented.

It was thought extinct as early as the 1920s, but then someone spotted a pair in Florida—and promptly shot them as trophies. Another bird was shot in Louisiana in 1932. By 1938, almost the only known ivory-billed woodpeckers were living in a forest in northeastern Louisiana.

To explain what happened, I need to back up a little. In 1913, the president of the Singer Sewing Machine Company bought almost 83,000 acres of timberland in Louisiana, with further purchases over the next few years that brought the total acreage to about 130,000. He designated the area as a refuge. By this he meant the trees could only be harvested with his permission, mostly for use in his sewing machines, and hunting was not allowed. It was called the Singer Tract, or just Singer by the locals, who continued to use the property as they had for decades—cutting trees for fuel and hunting game for food.

In 1920, Singer got tired of this and offered the property to the Louisiana Fish and Game Department, which hired wardens to enforce trespassing and game laws. The area is frequently called an old-growth forest, but in actuality much of it consisted of abandoned cotton plantations that had been reclaimed by forests.

Interest in the ivory-billed woodpecker had been growing ever since it had been discovered after its supposed extinction in the 1920s. In 1935, Cornell University sent a team of researchers to the Singer Tract to look for the birds. The team brought film and recording equipment instead of guns. They found the woodpeckers and took pictures and sound recordings.

The expedition was so successful that one of its members returned in 1937 to study the ivory-billed woodpecker for three years. Also in 1937, Singer sold 6,000 acres to a lumber company, and in 1939 he sold timber rights to the rest of the acreage to the Chicago Mill and Lumber Company.

In 1940, the Audubon Society convinced a Louisiana senator to introduce a bill to establish a national park protecting what remained of the Singer Tract. There was no money to fund the bill, so John Baker, an Audubon Society member, got pledges of support from the heads of the U.S. Forestry Service, U.S. Fish and Wildlife Service, and the National Park Service. He even got an endorsement from President Roosevelt for the bill. The governor of Louisiana pledged $200,000 for the purchase of the land, and in 1942 the head of the War Production Board confirmed that clearcutting the Singer Tract was not essential to the war effort. Governors of the neighboring states of Tennessee, Arkansas, and Mississippi sent a joint letter to the Chicago Mill and Lumber Company asking that they release their lease on the remaining timber.

Senator Ellender reintroduced the bill in 1942 with private funding taken care of, but it failed to get out of committee. And in December of 1943, the Chicago Mill and Lumber Company basically said they had no interest in conservation. They clearcut the remaining land. The last ivory-billed woodpecker was dead by 1944.

I wish I could tell you that the Chicago Mill and Lumber Company foundered and that its president choked to death on a bite of roast chicken. Unfortunately, the company did very well selling timber in the post-war boom. In 1965 the remaining Singer acreage was bought by a company in Chicago, and the lumber company leased the woodlands to private hunting clubs for a few years. Then they bulldozed and burned what was left of the timber to make way for soybean crops.

And no, the locals were really not happy about all this. In 1980, what was left of the area was finally bought by the state. The Tensas River National Wildlife Refuge was dedicated in 1998 and looks like a nice place now, but its only ivory-billed woodpeckers are a pair of stuffed specimens on display.

Of course there were numerous sightings of the bird in different areas, but they didn’t amount to much. For instance, in 1971 someone took two grainy photos that might have been of an ivory-billed woodpecker. In 1999 a forestry student sighted a bird but didn’t get a picture. Things like that. Then, in 2004 sightings started trickling in from Arkansas.

It started quietly enough. A kayaker posted online about seeing an unusually large woodpecker in a wildlife refuge. A team led by the Cornell Laboratory of Ornithology conducted a secret intensive search of the area—secret so the place wouldn’t be inundated by birdwatchers.

That search resulted in more than a dozen sightings, possibly all of the same bird. The team even managed to catch a bird on video in April 25, 2004. Quietly, secretly, the Nature Conservancy and Cornell University bought up some of the land in the area to add to the wildlife refuge, just in case.

The sightings were made public in early 2005, when an article appeared in the journal Science. Cornell declared the bird rediscovered instead of extinct.

Unfortunately, the four-second video taken in 2004 is blurry. William Rhein’s 1956 footage of the imperial woodpecker is a lot clearer, and he shot it from the back of a mule. It’s impossible to determine from the 2004 footage whether the bird is an ivory-billed woodpecker or not. Skeptics believe it might be a pileated woodpecker, a crow-sized bird with similar markings but which isn’t actually very closely related to the ivory-billed.

The problem is, while the video evidence is not very persuasive, the audio is. The ivory-billed woodpecker’s calls were well documented by the 1935 expedition, and the 2004 and 2005 recordings seem to be of the same type of bird.

The 1935 recording was taken very close to the birds. In order to compare it with the new recording, the team took the original recording to the same area and played it back in the distance.

And this is what the modern recording sounds like:

Personally, I am convinced that the 2004 and 2005 audio was of an ivory-billed woodpecker. There is no other bird in North America that sounds exactly like the recordings, and the audio also sounds identical to the 1935 audio.

Further searchers for ivory-billed woodpeckers turned up nothing. By 2010 the excitement had died down and searches were called off, although it’s been a boon to Arkansas’s tourist industry. Birders and conservationists continue the search, though, and occasionally record what might be the bird’s call.

It’s always possible the ivory-billed woodpecker still hangs on in various areas. The problem is whether any remaining populations have enough genetic diversity to survive even in ideal conditions in this point.