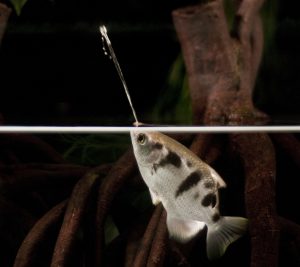 A regular roly poly and a spiky yellow woodlouse. Can you spot which is which?? 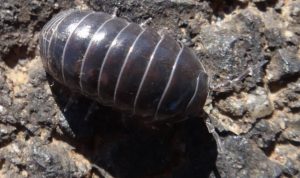 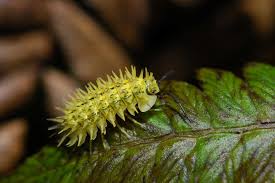 A nightjar. Turn out light pls, is too bright: 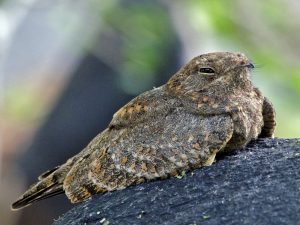 A white-winged nightjar showing off his wings: 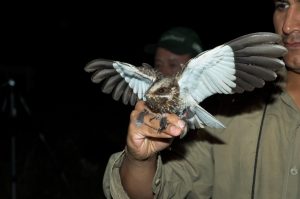 I’m really, really behind in getting to suggestions, as you will probably know if you have sent in a suggestion and you think I’ve forgotten all about it. So before the end of the year, which is coming up frighteningly fast, I’m going to try to get to a lot of the older suggestions. So this week we’re going to learn about a fish, an invertebrate, and a bird.

The archerfish isn’t one fish, it’s a family of fish who all catch insects in an unusual way. Most archerfish species are small, maybe 7 inches at the most, or 18 cm, but the largescale archerfish can sometimes grow up to 16 inches long, or 40 cm. All archerfish live in Asia or Australia, especially southeast Asia. They like rivers and streams, sometimes ponds, and a few species live in mangrove swamps and the mouths of rivers where the water is brackish. That means it’s saltier than ordinary fresh water but not as salty as the ocean.

The reason the archerfish is so weird is the way it catches insects. Think about its name for a minute. Archer-fish. Hmm. An archer is someone who uses a bow and arrow, but obviously the archerfish doesn’t have arms and hands so it can’t shoot tiny arrows at insects. But it can shoot water at insects, and that’s exactly what it does.

The archerfish has really good eyesight, and it learns to compensate for the way light refracts when it passes from air to water. When it sees an insect or other small animal, maybe a spider sitting on a branch above its stream, it rises to the surface but only far enough so that its mouth is above water. Then it forms its tongue and mouth to make a sort of channel for the water to pass through. Then it contracts its gill covers, which shoots a stream of water out of its mouth. But because it shapes it mouth in a really specific way, the stream of water turns into a blob as it flies through the air, like a tiny water bullet. The water hits the spider, which falls from its branch and into the stream, where the archerfish slurps it up.

But the archerfish has to learn how to aim. Young archerfish aren’t very good at it, and they have to practice to shoot accurately and far. They can even learn by watching other archerfish shooting water, which is rare among all animals but practically unheard-of in fish.

Sometimes the archerfish will shoot underwater, sending out a jet of water instead of a bullet. It does this mostly to expose small animals hidden in the silt at the bottom of a pond or stream. And sometimes, of course, if the insect is close enough to the surface of the water, the archerfish will just jump up and grab it.

The archerfish shoots water with a force that’s actually six times stronger than its muscles would allow, and it does this by taking advantage of natural water dynamics. This means it uses a lot less energy to shoot water than if it was only using its muscles, and it gets a better result. It can shoot water up to ten feet away, or three meters, to bring down an insect or other small animal, although of course it prefers closer targets.

Archerfish do well in aquariums, so they’ve been studied by scientists to find out how smart they are. It turns out, they’re pretty darn clever. The archerfish takes into account the size of its target to adjust how strong a blob of water it needs to shoot. It also recognizes individual humans by their facial features. So it’s probably a good thing that they don’t have little arms and hands.

Next, Kim sent me some great suggestions way back in August, and I feel terrible that I’ve taken so long to get to any of them. We’ll look at one of those today, an invertebrate officially called a terrestrial isopod, although you may know it by one of a lot of different names. My preferred name for it is roly poly, but it’s also called a sowbug, a wood louse, a pillbug, a doodlebug, and many others.

You have probably seen roly polies, because they’re really common. The most well-known family are the various species that can actually roll up into a ball when threatened, Armadillidiidae, and someone with a sense of humor came up with that name. They’re native to Europe, but they’ve been introduced all over the world. They’re gray or brown-gray in color, armored on the back with overlapping segments, with seven pairs of little legs underneath and a pair of little antennae.

Roly polies eat decaying plant material and sometimes living plants, especially if the plant is wet. In a pinch, they will also eat dead insects and other decaying matter, but mostly they just want that yummy rotting leaf. As a result, they’re valuable decomposers in the food web. They also need moisture to breathe, so they’re often found in soil, under rocks and leaf litter, and in moss.

But Armadillidiidae isn’t the only family of roly polies. Most roly polies actually can’t roll up at all, so I should start using one of their other names, woodlouse. Technically, woodlice are crustaceans. You know, related to crabs and lobsters. But they are infinitely cuter than other crustaceans. And if you’re curious about whether they taste like lobster, apparently they taste awful, like urine. I don’t even want to think about how anyone knows what a woodlouse tastes like, or how anyone knows what urine tastes like. Yuck. Anyway, they’re descended from marine isopods that ventured out on land over 300 million years ago, but a few species have returned to the water and are aquatic.

All woodlice have segmented, flattened bodies with seven pairs of legs. When a woodlouse molts its exoskeleton, it does it in two stages. It molts the back half first, then the front half a few days later. This means that it’s not as unprotected as other arthropods that shed the whole exoskeleton at once.

There’s another arthropod called a pill millipede that looks a lot like a woodlouse, including being able to roll into a ball. But it’s actually not very closely related to the woodlouse. Pill millipedes have 18 pairs of legs and a smoother appearance.

Almost all woodlice are gray or brown, although a few may have small yellow spots. But one is actually yellow and looks very different from other woodlice. It’s called the spiky yellow woodlouse, which is a perfect description. It’s critically endangered, because it only lives in one part of the world, a volcanic tropical island in the South Atlantic, Saint Helena. It lives in trees, but it’s so threatened by habitat loss and introduced rats and other non-native species of woodlice that a captive breeding program is underway to save it. There may be as few as 100 individuals left in the wild, but fortunately it’s a lot easier to keep in captivity than, say, 100 rhinoceroses.

Let’s finish with a bird. Callum suggested caprimulgiformes, which includes nightjars, potoos, oilbirds, and whippoorwills. We’ve talked about a few of them before in previous episodes, including the oilbird in episode 121 and the Nechisar nightjar in episode 70. I know we’ve talked about the tawny frogmouth somewhere, but I can’t remember which episode. Maybe it was a Patreon episode. But we’ve never looked at most caprimulgiformes, so let’s do that now, because they are weird birds. We’ll focus on the nightjars, which are also sometimes called goatsuckers, not to be confused with the chupacabra, which also means goatsucker. In the olden days people used to think nightjars snuck into barns at night and suckled milk from dairy goats. They don’t, though. Birds can’t digest milk.

Nightjars and their close relatives are nocturnal, although some species are mostly crepuscular, which means they’re most active at dawn and dusk. Like the owl, the nightjar’s feathers are very soft so that it can fly silently. It eats insects, especially moths.

There are three subfamilies of nightjars: the typical nightjars, the eared nightjars, and the nighthawks, with lots of species in each group. They live throughout most of the world and they all look similar. We’ll take one typical nightjar as an example, the European nightjar. It lives throughout most of Europe and part of Asia, although it migrates to Africa for the winter. It’s brown and gray mottled with lighter and darker speckles, which makes it really hard to see when it’s sitting on a branch or on the ground in dead leaves. Its head appears flattened and it has a short, broad bill. Its feet are small. It has large eyes and sees well even in darkness. It grows to about 11 inches long, or 28 cm, with a wingspan of about two feet, or 60 cm.

The female nightjar lays her eggs directly on the ground instead of building a nest. Usually she’ll pick a spot where long grass or other vegetation hangs over to form a little hidden alcove. Since the nightjar is so well camouflaged, it can incubate its eggs on the ground in plain sight and probably won’t be seen. If a predator does approach the nest, the parents will pretend to be injured, so that the predator follows the supposedly injured bird hoping for an easy meal. Once the nightjar has drawn the predator far enough away from the nest, it flies away. Some nightjars can even pretend to be injured while flying.

Some nightjars have beautiful, haunting songs while some are nearly silent. The male chuck will’s widow, which lives in the southeastern United States and much of Mexico, sings at night and also claps his wings to show off for females. His song sounds like this.

Because nightjars are so well camouflaged and mostly nocturnal, they’re hard for birdwatchers and scientists to spot. As a result, there are undoubtedly nightjar species still unknown to science. This is the case with the Nechisar nightjar, which we talked about in episode 70. It’s only known from a single wing found on an otherwise squashed dead bird that was hit by a car. And until 1997, the white-winged nightjar from South America was only known from two museum specimens.

Since the first white-winged nightjar nest was discovered in 1997, researchers have learned a lot about it. It’s only been found in a few places in Brazil, Bolivia, and Paraguay, and it likes open lowlands and savannas. The male has white markings on his wings, and during breeding season he finds a termite mound to stand on, spreads his wings to show them off, and then flies up. As he does, his wings make a distinctive sound. Since most nightjars fly silently like owls, the beating of the male’s wings is intended to attract a female. This is what it sounds like:

Like other nightjars, the white-winged nightjar female lays her eggs directly on the ground. Some researchers think she times the eggs to hatch around the full moon so the parent birds have more light to forage for insects. In years where there’s lots of food, the female may lay eggs in a second nest near the first one and incubate them while the male feeds the babies of the first nest.

Many nightjar species are endangered due to habitat loss, but it’s also killed by cars more often than other birds because of its habit of sitting in the road. That does not strike me as being very smart. Maybe it needs to talk to the archerfish for some advice.

This is what the little nightjar sounds like. It lives in South America: